Greetings once again, this is the final installment of the Backlog Bronze Ring Scroll I have been working on.  This post will not be kept to my usual 750 to 1,000 word limit.  Astute followers of my blog may remember having said that I was going to do a third draft before doing the final draft and may be wondering where that third draft went.  Very good catch!  As an artist I got creative and took a very strong short cut.  I cut the second draft where the spacing was proposed to go.

Cut at spacing but not separated.

Then I took a comparison picture with the exact spacing it would have if written that way.

The spacing is exactly what it would be if written that way.

This took me about ten (10) minutes of work.  Rewriting it to get very similar results would have taken me hours of work.  Creative, useful, instructive and a heck of a time saver.  And the recipient was able to use and understand it as well.  This was agreed upon and so I set to doing the final draft on velum.

If you have been following along since the first draft you may notice similar design choices.  That is one of the big reasons for doing drafts, so there are no surprises on the finished project.  The more “surprises” there are the more likely mistakes are to be made.  The final project should be as smooth and easy as possible as that makes the best art.

I have close to thirty (30) pictures of this process that I will be sharing with you.  For those that do not know the Bronze Ring is the highest level award for Rapier in the SCA’s Middle Kingdom.

I love working on parchment but am also very respectful of it.  It is a very easy calligraphy support to work with but also very expensive.  It does not act like paper at all and it interacts with inks and other various tools and materials of calligraphy differently than paper does.  In general I find it much easier to work with though it does have its quirks like bucking or curving on its own.

Line pricks into the parchment at the bottom left of the text block.

Close-up of lines and pricking. Again at the bottom left of the text block.

You do this by simply using a square of some kind, in this case t-square and drawing the lines at the appropriate prick point.  Simple and easy but it can be tedious.  I suggest just relaxing into it and it goes much easier for you.

Part of the circle drawn in. I used a compass of course. 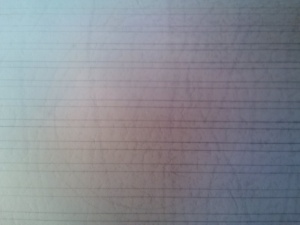 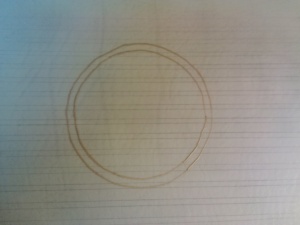 First ink on the velum. I traced over the circle using a gold colored ink.

I used Speedball’s gold colored ink.  The ink was thick so I added water to it until it was the best consistency.  Why didn’t I use a period gold colored ink?  I will not use the chemical’s needed to make gold or silver ink around my family and I otherwise lack a place to make it safely.

Rapiers traced in but they don’t quite look right.

I traced in the rapiers using a light board.  Something didn’t go right when I did that.  So I fixed it free hand. 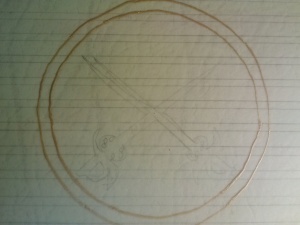 Okay, it is fixed. But now there are two sword tips on the left

And that is okay.  I will be erasing the lines as one of the finishing parts of this piece.  All I have to do is trace over the correct sword part with the silver ink and when I erase the lines the original drawing will disappear along with the rest of the lines.

Yes, that will do just fine.  The hard part when you make a mistake is knowing how much to correct now and how much to leave for later.  If I had started erasing now, I would have to redraw the lines which takes time that simply can be avoided.  Also erasing will modify the surface of the velum.  Nothing that can’t be fixed, and maybe it won’t need to be fixed, but why take the chance when you do not need to?  Leaving in the mistake until all the lines are getting erased really is the wisest choice on this one.

Stage one, put in the rubricated oath.  This is a choice to make it stand apart from the award yet include this dear to the heart portion of what it is to be a Companion of the Order of the Bronze Ring.

The red ink comes from a period recipe I blogged about previously using Brazilwood, vinegar, alum, and gum arabic.

A close up look of the lettering switching colors.

Switching the ink color is not an easy thing to do.  The two most consistent problems are making sure not to go over color lines and keeping the angle of the stroke correct.  This is where consistency with lettering really helps.

A step back just a bit andyou can see how this really works.

Well that’s pretty and it works.  But wait, isn’t that a drop of gold ink there?  Yes, it is.  And when the time comes I’ll fix it.  I will need to very gently scrape that.  Not something that needs to be now.  Timing is important. 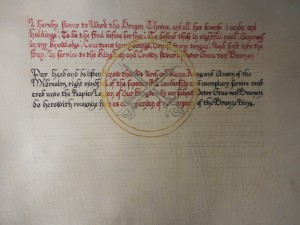 We can see the picture filling in with the text.  The lettering changing colors really starts to look a better at this stage in the overall perspective.

Up close of the left side. A lot of color changing going on here.

And here is the right side with the lettering changing color.

And another drop of gold needs to be taken care off.  I will scrape it when I scrape the other ink issues that come up.  No project is perfect in the making so strive to make the least mistakes possible.  Someday you may do a perfect project after all.

Now its done. No, not really But the inking is completed for the most part. 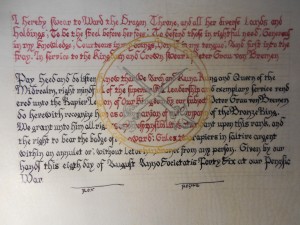 Closer view of the text block. Enlarge the picture by clicking on it and you should be able to see some very good detail.

Lots of work left to be done.  Erasing lines scraping mistakes, redoing areas that need it.  But instead let’s take a closer look first.

Bottom right showing lines and some color changes in the ink.

You may notice that there are no holed pricked over here.  That is because I used a t-square and not just a straight edge. 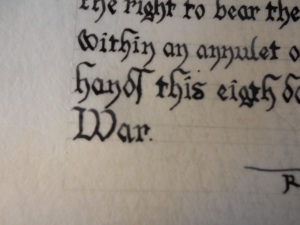 We need to get rid of those lines though.

Lines are gone and so are the gold ink spots as well as other ink issues that came up.

Now that is looking pretty darn finished.  But let’s take a closer look and enjoy it some more.  Notice how the lines being gone really makes a big different to the overall look of the piece. 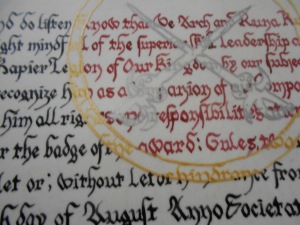 Most of the badge with erased lines.

The original badly traced sword on the left is gone as if it never existed.  Other problems are gone as well.

Bottom of the badge showing the color changes in very difficult places.

I really love how this piece, most pieces really, just seem to fall together at the end.  This one I am particularly happy about.

The top of the badge once again but with the lines gone.

I prefer to use a MOO eraser for erasing on paper an velum.  It works very well and I don’t worry about it picking up the ink just the graphite.  In period they might have used lead or a lead/tin stylus to draw the lines.  If they wished to erase the lines afterwards they would have used bread, often but not always rye bread.

I loved working on this scroll for Peter.  He received it from my hands on January 18, 2015 about 2 1/2 years after having been elevated to the Order of the Bronze Ring.  I picked it up from the previous scribe in the past six months and have worked on it.  This sounds like I did a lot of work and no doubt that I did.  But the real work were the years of learning rapier, the countless hours of teaching rapier, including to me and others that I watched, and the hours working as Rapier General of the SCA Middle Kingdom. The work and reward are Peter Grau von Bremen’s!