I wanted to do an ongoing series of blog posts designed to help calligraphers see their calligraphy more clearly.  I hope to help the calligrapher to train their eyes and their brain to see what is actually happening with the ink on the paper and how that can be different than when their brain fills in information that really isn’t there.  Our eye sees everything we are doing, but our brain often wants to interpret what we see differently than it really is.

Today I will be focusing on two things.

1 – How our brain draws imaginary lines and doesn’t like it when reality doesn’t match what it wants.

2 – How to take avoid those problems and to take advantage of them.

Our brain wants things to fit into a certain existing pattern.  This is especially true with visual patterns and in our case letter forms.  And when it comes to writing our brain, (we say our eye) becomes fatigued rather easily and fatigues even more easily when its expectations are not being met. 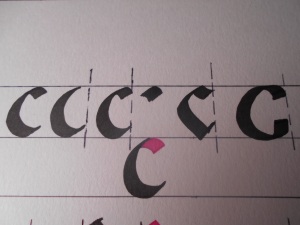 The first “c” in the picture seems to be leaning forward?  It is round letter, how can it lean?  Because our brain draws an imaginary line between the two endpoints of the “c” and if they are not perpendicular to the baseline then our brain says it it leaning, in this case forward.

I drew that imaginary line as a dashed line.  The first stroke of the “c” looks like it is leaning backwards.  When I drew in the second stroke of the “c” making the two end points perpendicular to the baseline. Notice how our brain more readily accepted that shape?  Notice that it isn’t a very big second stroke, hardly anything at all.  Yet, as the “c” with the pink second stroke shows, it makes all the different in the world.  That second stroke not only makes the “c” look upright, but it helps to balance out the “c” with an even ‘weight” for the brain to work with.  And it is true for the letter “c” in a variety of scripts. Shown here are Uncial, Batarde and Insular Majuscule.

This imaginary perpendicular line holds true for the letter “e” as well. 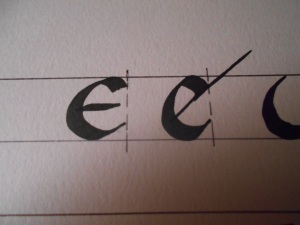 And as you can see it doesn’t matter if the middle stroke stops before the imaginary line, pierces it, is flat or is at an angle.  Your brain is happy because the two “end points” of the “e” are perpendicular to the baseline.

So when you are drawing open round letters such as the “c” and the “e” keep this imaginary line in mind.  End your strokes a the same imaginary perpendicular line.

This imaginary line doesn’t exist just for open letters.  It can show up for other letters as well.  For the letter “d” your brain expects something different but it still is using an imaginary line. 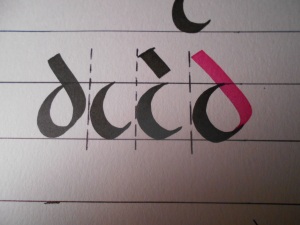 Here the first letter “d” (an uncial “d”) also seems to be leaning forward just a bit.  But its round and closed, how can it be leaning?  The ascender isn’t quite where it needs to be.  In this case we move the imaginary line to the left of the letter.  We want it to just barely touch the left most part of the “belly” of the “d”.  The first stroke is exactly the same first stroke as the “c”.  We then move our pen above that stroke and we should start it at that imaginary line.

We pull the pen down and to the right.  As the pink stroke shows we actually pull it down and catch about 1/2 a nib width of the tip of that first stroke.  This makes the brain believe it is seeing a single pen stroke and letter instead of a bunch of separate pen strokes that make up one letter.  We then finish the stroke by “landing” in the end of bottom part of the first stroke. Though this isn’t a particularly good example of that. 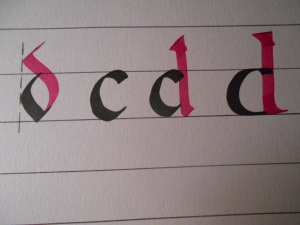 Even if the final ascender stroke doesn’t start at the perpendicular line our brain likes to see the stroke touch that line if the ascender comes near it as shown by the batarde “d”.

What about “d”s that have an ascender only on the right of the letter?  We are closing the letter and keeping a straight back.  That means our eye won’t be as tempted to draw in imaginary lines.  We can use the same trick as we just learned though.  The first part of the “d” very often a “c”  Then we draw the straight ascender backbone.  If you draw that ascender through the strokes of the “c” you will achieve the affect of being one letter of one stroke.  Also, as demonstrated, you can cover up any mistakes you made not getting the end points to have lined up perfectly which is very helpful.

The letter “o”.  It is a simple letter and it just sits there correct?  No.  It too can lean and mistakes can be make. 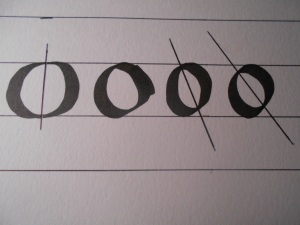 I like to use the letter “o” to teach about how the thicks and thins of the letter draw and directly our eyes.  The flat pen (zero angle) creates a bit of a flat topped flat bottomed “o”.  It really commands our attention though as it has “heavier” (darker and thicker) lines than other “o”s.  Careful though with your angled pen “o”s because you can still make flats on your “o” that shouldn’t be there or you can swing too wide as the second “o” attempts to show.  The third and fourth “o” show how an “o” can indeed lean because when properly formed, the thins are opposite one another and the brain draws an imaginary line through them making it think the letter is leaning.  A 30 degree pen will create a 60 degree lean.  A 45 degree pen will create a 45 degree lean.  In fact by a quirk of geometry and math, subtract the pen angle you use from 90 degrees and that will be the angle you “o” seems to be leaning at.

I hope this has been helpful in teaching you how your brain interprets things and hopefully has shown you how to use it and take advantage of it.

9 responses to “Getting deeper in how calligraphy works – A series.”