Well, yes.  Am I reactivating this blog?  We’ll see how that goes.

I spent the last two years working on getting a Masters of Science in a field that has nothing to do with this lovely and wonderful private scholarship (hobby) I do.  It has been almost a year since my last entry.  And yes, I am back doing more historical scribal research and projects.  Today’s post is a project I did that did not go as planned.

I had scheduled about 20 – 40 hours to work on this project.  I scheduled and set up things and set aside those hours the week before the project would be needed.  And then I got sicker than I’ve been in a long time.  The firs/t three scheduled days were a total bust.  I was not able to work on the project at all.

Day 4 was a recovery day and I was only able to put four hours into it.  Broken up throughout the day.

Day 5 I had three hours sleep the night before, and frankly it shows.

No excuses, I did it, it is done.  And it turned into a rather involved proof of concept project.  Which honestly, it probably should have been to begin with.

So with no further ado, just what have I been talking about?!

Writing specimens are exactly that. They are samples of the scribes writing as an advertisement to get your business.  Typically they were drawn up and inserted into books that were already sold. That way the customer (or patron if one was lucky enough) could order another book with the writing they wanted.  And if not they could share it with their acquaintances and be free advertising for the scribe. 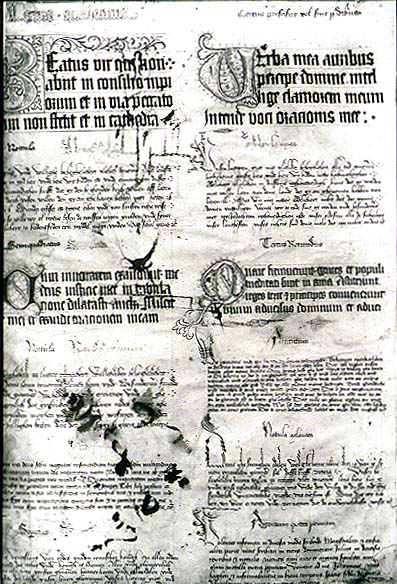 For obvious reason not many writing samples survive to today. Those that do often show the results of being used the way they were intended to be used. Handled and passed around.

You see a bit more than just writing here.   But it is all penwork.  Filigree and drawn capitals as well as embellishments.  The above sample doesn’t show much in the way of rubrication but some samples do.

First I determined that I wanted to do six scripts and created six even spaces on the support.  Then I determined I wanted to put the scripts’ names in gold.  I unwisely chose to write the names with an 8 mm x height (about 9/16″) While this give a definite pop it also takes up a lot of space.  Very pretty and worked for the proof of concept.  I won’t be writing that largely for the final project.

I chose to do the gold headings in both a gilded and ink medium.  It turned out rather nicely.

Gold as always if hard to photograph well.  I wrote the gold ink and the gilded base on my sloped desk.  I did the gilding on a flat surface and used a gilding pad to burnish.  Both the gilding base and the gold ink were written in using a quill pen. 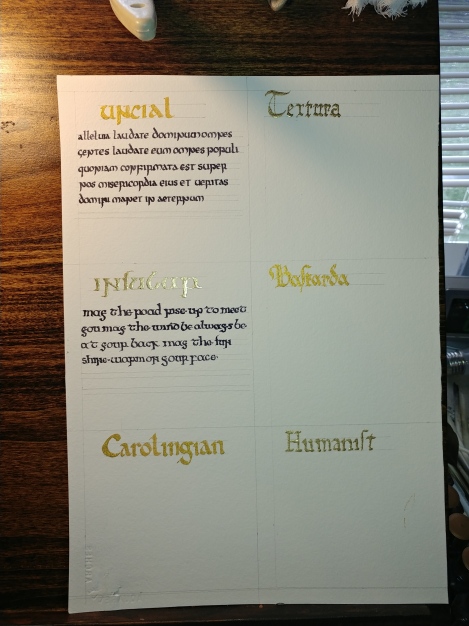 Uncial and Insular specimens are inked in.

The writing specimens are written in at roughly a 3 mm x height.  I used a a quill pen for all my writing.  Changing what script you are using can cause some minor brain hand confusion.  It helps to take breaks between writing different scripts.  As long as you focus on what you are doing now though it isn’t much of a problem.

Again, writing was done on the 45 degree slanted scribal desk. 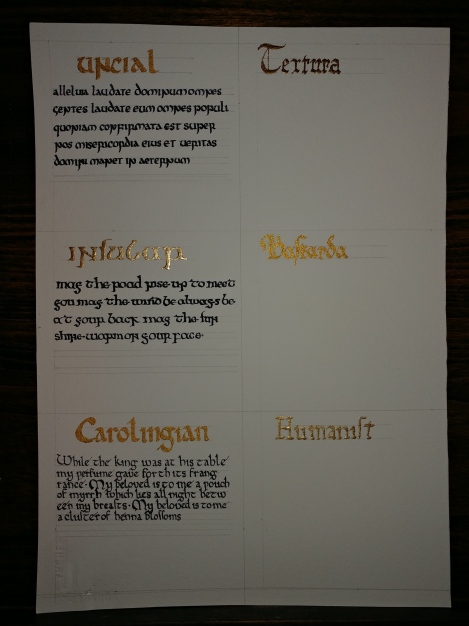 The left column is completed. And so is the “first day’s” worth of work.

A closer look at what I accomplished on recovery day the first day of writing and day 4 of the scheduled time to do this. 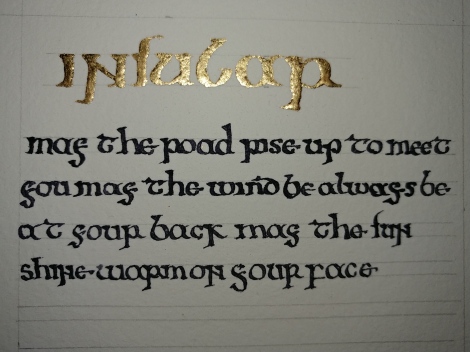 So that was day 1 of writing (day 4 of scheduled time).  Much was done but obviously there is the entire right side left to ink.

And that didn’t go so well.  Very little sleep and still partially recovering from being sick.  None-the-less, I did do it and all things considered I’m happy with this as a proof of concept project.

The right column is done. Done inking but not done with the project. There is still stuff to do. 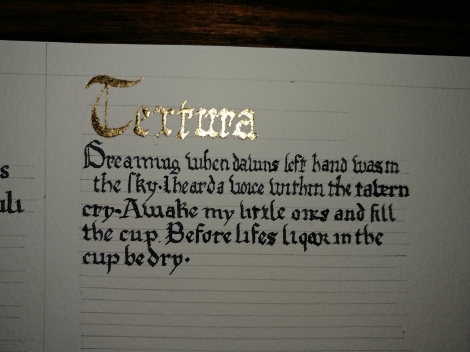 For whatever reason my pen and I decided we had to have a fight. In truth I hadn’t cut the quill as well as I should have and I wasn’t paying attention to my ink as well I should have. All of that is on me.  Also, two years of not regularly doing calligraphy practice shows. 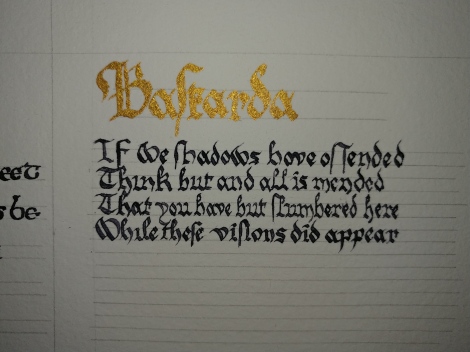 No longer fighting with the pen as you can see. Still, not where I wanted to be with the script though. Again that is all on me. If you look carefully you will see I missed strokes The “a” in “have” is actually an “o” as I didn’t put the tail of the “a” on. 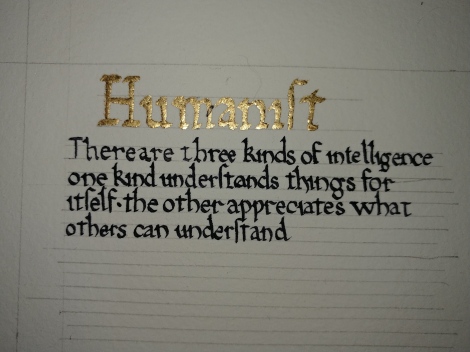 Humanist minuscule is based on carolingian minuscule. And yes, I dripped one small drop of ink on the gilding. 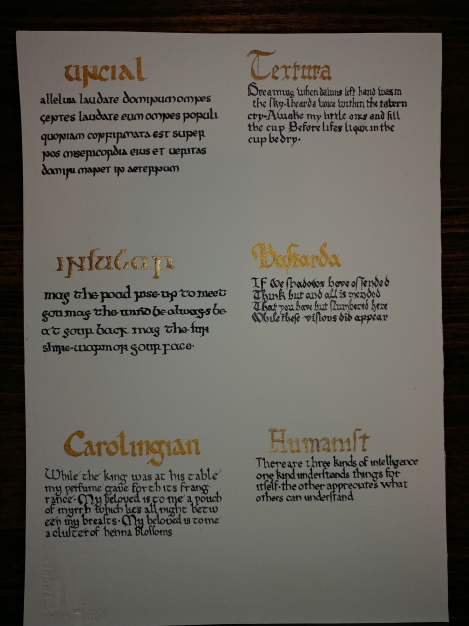 Project is all cleaned up. The lines are erased. Any scraping of mistakes that was needed is done and the ink drop was (not well) cleaned off the gilding.

All in all I can’t say this is a terrible job.  I can do better.  And as this was a proof of concept project, I will do better with the final project.  Changes will be made and additions will also occur.  I plan to do the final project on parchment I made myself and just needs to be sanded down to the proper thickness and quality.  Rubrication and filigree work should also be included on the final project.

2 responses to “Back in the Scriptorium Again?”